Best Might Still Be Ahead For Unbeaten Fairfield Prep Hockey 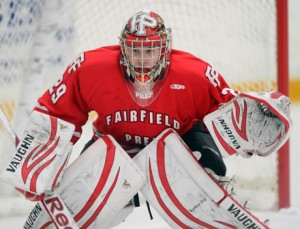 Coaches have the unique ability to find flaws with their teams, even after the biggest of wins.

The Fairfield Prep (Conn.) hockey team gave Matt Sather a few things to obsess over during Saturday’s game against fellow state superpower Notre Dame-West Haven. Prep’s  defense was spotty in the first period and it went into a bit of an offensive shell in the second period.

The Jesuits gave Sather more reasons to be happy than fret, however. They went into a jam-packed Bennett Rink in West Haven and handed Notre Dame its first loss of the season, 3-1, improving to 7-0.

Prep is the state’s only unbeaten team in CIAC Division I, and a unanimous No. 1 in the New Haven Register’s hockey poll. It’s been one of the state’s most consistent winners over the years, having won 14 state titles. Seven of those championships have come in the last 13 seasons. They also recently won the prestigious Mount St. Charles (RI) Holiday Face-Off Tournament, beating, among others, New Jersey power Delbarton (Morristown, N.J.) in the final.