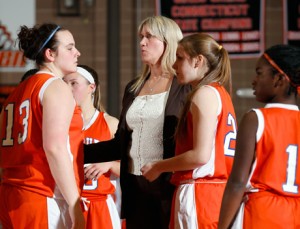 Danbury (Conn.) is the state’s top-ranked girls’ basketball team, so one expects to see a menacing bunch.

Upon first impression, the Hatters won’t instill fear in anyone. They’re not blessed with much size, or with wing players who hit shots from all over the court.

“We’re not exactly the intimidating team,” Hatters’ junior Rebecca Gartnerchuckled. “It’s not like we have that one player who’s going to UConn.

“All together, we’re making it. I know what you were expecting (to see).”

Danbury passes the eye test once the game begins. It’s passed every challenge it’s faced on the court this season. The Hatters beat neighboring Ridgefield Thursday night, 50-40, to remain one of only three unbeaten teams in
Connecticut.

“We’ve just been playing together for such a long time, Gartner said. “We know what our weaknesses are and we know what our strengths are. We just know each other well and work really well as a team.”

“These kids have a lot of heart,” said Danbury coach Jackie DiNardo, now in her 26th season as the team’s head coach. “A lot of heart.”