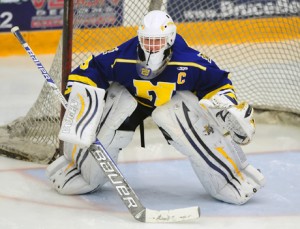 Goaltender Drew O’Leary anchors a defense that has Newington/Berlin/Manchester looking for another title. MaxPreps photo by Kevin Pataky.

The defending CIAC Division III champion Newington/Berlin/Manchester hockey co-op has faced a new obstacle this season — they’re the team everyone else wants to beat.

Hey, it beats the alternative.

The Indians (10-2-2) are coming off their first state championship and are presently the top ranked team in Division III.

“Every team we play, we’re pretty much getting their best, no matter who they are,” said Dave Harackiewicz, who’s in his 20th season as the Indians’ head coach.

“(Opponents) are definitely a little extra motivated, and we knew that coming in, having won the state title. We knew that was going to be the case, and we know we’re going to have to battle every game. I think early on (the players) recognized it.”

Here’s a good indicator of how hard teams are going after the Indians — half their games have either been decided by a goal or finished in a tie.