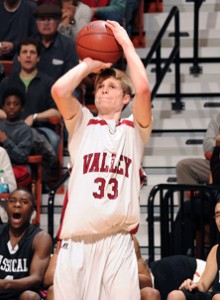 One of four co-captains, Just Luster has helped propel Valley Regional to the top of the Shoreline Conference. MaxPreps photo by Jim Stout.

The Valley Regional (Deep River, Conn.) boys basketball team faced an unusual dilemma when choosing its captains for the 2012-13 season.

“We have four captains, which you’d never do,” Valley coach Kevin Woods said. “That’s a lot of captains for basketball, but it’s really a unique group of kids. There was such parity across the board that you couldn’t put one above the other.”

So far, Valley has separated itself from the rest of the Shoreline Conference. It hadn’t lost a league game heading into Thursday’s regular-season finale against Old Saybrook. It’ll also be the top seed in the Shoreline tournament.

The Warriors’ success is made more impressive given the state of the program years ago. They didn’t make states from 2004-08. They finished 10-10 during the 2008-09 regular season.

Woods and Jeff Bernardi had to become co-coaches in January 2010 after Bob Mayer resigned due to personal reasons. Valley went all the way to the Class S semifinals before losing to eventual champion Hyde of New Haven.

Filed Under: MaxPreps
← Eye On The CIAC
Dance Competition Has New Start Time →