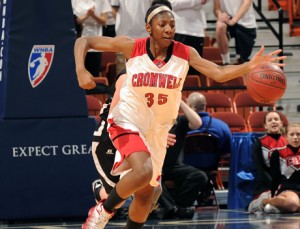 The Cromwell (Conn.) girls basketball team set some lofty goals before the season, among them going unbeaten and winning the CIAC Class M title.

The Panthers are halfway to achieving both goals, but they aren’t spending much time discussing their record.

“I wouldn’t say that they talk about it,” Cromwell coach Kelly Maher said. “They know they’re undefeated. At our games, the fans talk about it more.

“They want to win a state title, Maher added. “Until they do that, you won’t hear much from them. That’s more important to them than going undefeated.”

The Panthers are three games away from a perfect season and the state title that has eluded their program. They play host to Kolbe Cathedral (Bridgeport, Conn.) in Thursday’s Class M quarterfinal round.

Cromwell (25-0) won the Shoreline Conference title. It also has a quality non-conference road win over defending Class L champion Bacon Academy (Colchester, Conn.), 53-50. Bacon is the top seed in Class L and has advanced to the semifinals.