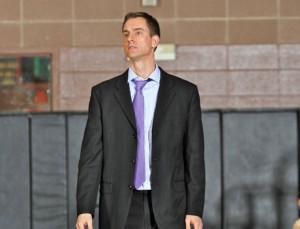 Weston boys basketball coach Mike Hvizdo has helped guide his team to the Boys Class M final after a tumultuous close to the season. MaxPreps photo by Matt Dewkett.

The Trojans showed their belief in Hvizdo this winter, when they fought to get his job back. He had been banished after a short film he appeared in 10 years ago was brought to the attention of Weston administrators.

Weston will play for the CIAC Class M championship on Friday night at Mohegan Sun Arena. Hvizdo will be coaching them. And they’ve reached the final despite being one of the lowest seeds in the division.

“The energy and the belief that me and my boys and my coaching staff, and the support of the community, has really helped us rise above,” Hvizdo said. “(There’s been) an amazing amount of energy. Not just physical energy, just energy. We feel it and we’re using it and we’re playing together. We’re playing as a family.”
The Trojans (14-11) will play No. 5 Valley Regional (Deep River, Conn.) for the title.Follow the game live on Qwixcore.
“It was a big-time emotional lift,” senior captain Charlie DiPasquale said of Hvizdo’s return. “I really got fired up by it. There’s been a lot of emotional ups-and-downs. Having to deal with the adversity, this was the biggest test, and we pulled together.
Read the whole story at MaxPreps.com.
Filed Under: MaxPreps
← CIAC Basketball Tournament Will Open With Dedication Ceremony
CIAC Set To Hold Second Team Bowling Championship →