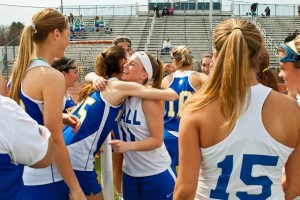 WEST HARTFORD — Coping with the tragedy that befell the Sandy Hook section of their town on December 14 is a recurring nightmare that the Newtown High girls lacrosse players will be forced to endure the rest of their lives.

The camaraderie engendered by their team under the guidance of coach Maura Fletcher provided group therapy when the pain was sharp and new.

The girls, along with other members of the school’s athletic community, were given a forum in which to try and brighten the lives of the youngsters directly affected. From there, the girls have their love of sport and love for each other as means of temporary escape.

“When it happened, the [Newtown Youth Academy] opened up its facility for all the elementary school kids. High schoolers and all the sports teams got a chance to go there and kind of get the kids’ minds off what happened and put them into a happier environment, a positive environment,” said Newtown captain Julia Trudell, who will attend Vassar next fall. “I just thought that was a great way to start the healing process even though it was so soon afterwards.

“Now that we’ve gotten into the season, it’s obviously really hard to forget what happened, but it gives us a chance to take 50 minutes out of our day, put it behind us a little bit and move on with our lives.” 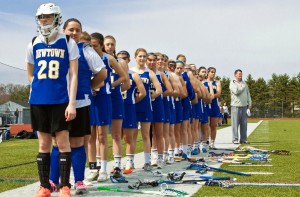 The Newtown girls lacrosse team in pregame ceremony. Photo by David B. Newman.

Scholastic sports continue to provide a positive outlet for the players and the community.

“Our town is united by sports somehow, whether it’s through football, basketball or lacrosse,” midfielder/captain Erin Kemming said.

As it is with Trudell, time on the field is therapeutic for captain Caroline Kingsley.

“When you’re out there, you’re not thinking about anything else,” she said. “I don’t think a day goes by where I don’t think about the tragedy, so it’s kind of a relief to be on the field and be with my teammates. It definitely helps.”

Coaches like Fletcher and those that oppose the Nighthawks on a game-to-game basis have to walk a difficult line. Fletcher’s leadership struck a chord with midfielder/captain Tressa Scott, who senses that the entire scope of the tragedy has yet to fully set in. 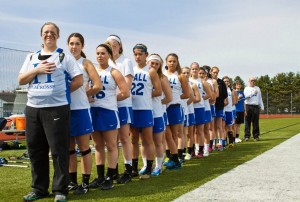 The Hall girls lacrosse team prior to its game against Newtown. Photo by David B. Newman.

“After this tragedy, being unified and being there for each other is a big part of coping and coming through it. It has a common ground where we can all bond.”

Opposing coaches, players and communities yearn to lend support in the most constructive ways possible.

Hall-West Hartford coach Steve Boyle brought his team to Newtown last spring. The welcome afforded by Fletcher and her girls was one he won’t soon forget. He thought about the Nighthawks with a heavy heart when he digested December’s tragic tidings.

Fletcher contacted Boyle and told him that the team was directly connected to the cataclysm through Paige Murphy. Murphy’s mother Anne Marie, a 52-year-old special education teacher, was among the victims, and Murphy is not with the team for her senior season. The conversation immersed Boyle deep in thought as to what actions the Hall players would take when Newtown visits April 15. 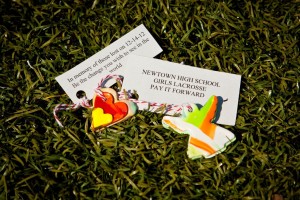 “I shared that news with our captains and our team and we said let’s try to do something,” Boyle said.

On March 23 while nearly 15,000 people ran in the Hartford Marathon Foundation’s Sandy Hook Run for the Families, the Hall players held a clinic for 150 girls in West Hartford.

The players and their youthful comrades simultaneously ran a ceremonial lap as an expression of solidarity with the runners in Hartford. They posed with a banner that read, “Hall Girls Lax Supports Newtown,” and every girl signed it. Boyle videotaped the occasion and sent it to Fletcher. He sought and received Fletcher’s acceptance of the plans taking shape for the 15th.

The banner was presented to the Newtown team before Monday’s game followed by a moment of silence.

Boyle and company also staged a postgame pizza party along the sidelines of an adjacent field where the junior varsity game was being played.

Boyle said the Warriors wanted to make sure the gesture was interpreted as being for Newtown, not for them. The festive interaction between the teams was unconditional testimony that Hall’s efforts hit their mark.

“Maura said, ‘There’s a Pay-it-Forward mentality at Newtown right now and it fills our spirit when you guys do something like that,’” Boyle said.

“They gave every one of my girls a little [hand-painted amulet] that had a pay-it-forward message on it. It’s beautiful and our girls will remember it always. It’s kind of neat because it was reciprocal. We wanted to let them know that this was just a game and at the end of the day we stand in solidarity with them. We all mourn what happened.”