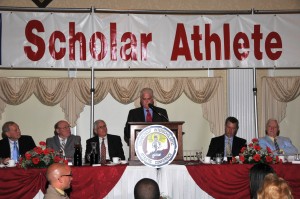 CHESHIRE, Conn. – Three hundred forty senior student-athletes will be recognized at the 30th annual Connecticut High School Scholar-Athlete Awards Banquet on Sunday, May 5 at the AquaTurf Club in Plantsville.

The 340 standouts will be honored as part of the Scholar-Athlete Program which annually recognizes two high school seniors – one boy and one girl – from each member high school whose academic and athletic careers have been exemplary, whose personal standards and achievements are a model to others, and who possess high levels of integrity, self-discipline and courage.

Among the honorees will be Michela Veillette, a Scholar-Athlete from Killingly High School, who has been selected to receive the Michael H. Savage Spirit of Sport Award. After the first field hockey practice of her senior season, Veillette found herself in the hospital in intensive care with an infection, where she remained for six days. Despite the health set-backs she returned for nearly the whole season, scored the winning goal in her final home game to help her team qualify for the CIAC postseason and made the all-state team in field hockey.

Ms. Kristine Lilly, Olympic gold medalist and World Cup winning soccer player and Connecticut native, will serve as the keynote speaker at the event, and ESPN Sportscenter anchor Bob Picozzi will be the master of ceremonies. The ceremony will begin at 4:30 p.m. and will be streamed live on the CIAC Network at www.CIAC.tv.

McDonald’s, the sole sponsor of the Scholar-Athlete program, is celebrating 30 years of partnership with CAS-CIAC at this year’s event. Through this partnership local McDonald’s owner/operators have honored nearly 10,000 outstanding students since the program’s inception in 1983.

The complete list of the 2012-13 Scholar Athletes can be found on-line here.