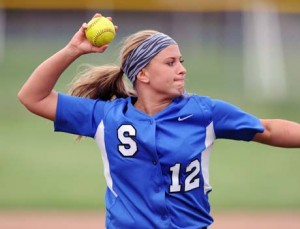 Senior co-captain Rachel Harvey and Southington have been on an impressive run thus far in the 2013 season. MaxPreps photo by Jim Stout.

All Southington (Conn.) softball coach John Bores wanted to do the first week of the preseason was get outside and practice, but the weather wouldn’t cooperate.

It was then Bores realized that his team was already focused.

“We didn’t get outside until after seven days,” Bores said. “I get really depressed when we have to stay in the gym because there’s not a heck of a lot you can do. Taking ground balls off the gym floor is not like getting out on the field, but they came out with a lot of enthusiasm, a lot of heart and a lot of spirit.”

The Blue Knights have sustained that energy and unleashed it on their foes. They’re 16-1 and will be among the favorites to win the CIAC Class LL title.

Southington was the top seed in last season’s LL tournament, but lost in the final to Amity (Woodbridge, Conn.), 10-6.

“We laid an egg after playing really well all season, so I knew the kids would come in motivated,” Bores said. “They’ve worked very hard in practice, so I expected us to be this good. I don’t know if I expected the offense to be this good.”

The Blue Knights have bludgeoned their foes by a combined score of 209-11.