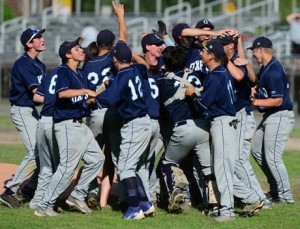 Oxford concluded a remarkable weekend for its athletics programs with an unlikely baseball title. MaxPreps photo by Kevin Pataky.

MIDDLETOWN, Conn. — Brian Hourigan, coach of the Oxford (Conn.) baseball team, held a newly-won CIAC Class S title under his arm on Sunday afternoon as he described the salad days of the program.

The Wolverines’ trying, embryonic stage was just five years ago.

“We started this (program) six years ago,” Hourigan said. “We were 1-19 our first varsity season (2009). We had a lot of games where they weren’t even close and we just kept fighting. Maybe that’s where that fighting spirit developed over those years. They (former players) all participated in this, building to get to this point.

On Sunday, the Wolverines beat defending champion and top-seeded Cromwell, 4-0, at Palmer Field to win the program’s first title.