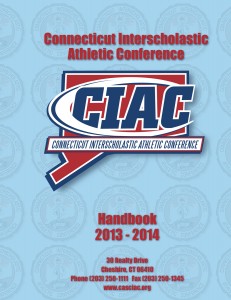 CHESHIRE, Conn. – The CIAC has posted the 2016-17 edition of the CIAC Handbook as well as 2016 Tournament Packets for all fall sports with all the information available for view and download on CIACsports.com.

The Handbook includes detailed explanation of seven by-law changes approved during the last school season which are effective for the 2013-14 school year including new policy for transgender athlete participation, giving schools the option to use Sundays as make-up games upon mutual consent, and language to clarify CIAC policy on CIAC membership. CIAC staff members also edited the Handbook in an effort to clean up language and remove contradictory and outdated policy. The complete Handbook can be viewed here.

Each tournament packet includes valuable information including tournament dates and entry procedures, playing rules including NFHS rule change and all other information regarding the administration of the specific sports. Each packet contains content and editorial changes from the previous year, the most significant of which are highlighted below, and coaches and administrators should familiarize themselves with the entirety of the packet.

Noteworthy changes from last season or other relevant information from the tournament packets are as follows: