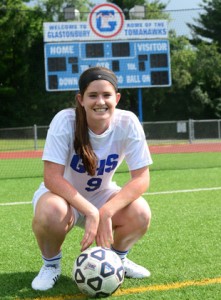 When you play high school soccer in Glastonbury (Conn.), there’s a lot to live up to. The history of success on both the boys and girls side is enormous. The youth program in town, the Hartwell Soccer Club, is in its fifth decade of operation, and sports nearly 3,000 members.

“(The players) understand that there’s 30-plus years of other girls putting on those Glastonbury shirts and working hard,” said Glastonbury girls coach Joe Finocchiaro. “They realize the history and tradition that we’ve been trying to build, and hopefully we can continue that tradition.”

No reason to believe they can’t.

Glastonbury is one of 10 fall girls teams to be honored as a national title Early Contender, presented by adidas and Dick’s Sporting Goods. With two straight CIAC Class LL final appearances in the book and numerous players returning from last year’s team, it would be news if the Tomahawks weren’t in the mix again in 2013.