Inside The CIAC – Oh What A Year 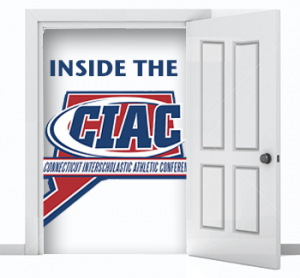 Trying to find a word to sum up the events impacting Connecticut schools last year would be a challenge for even the most adept linguist. An aggressive search through the thesaurus revolving around the word “challenge” would produce some apt results, but might fall a bit short of describing the incredible series of hurdles schools were forced to overcome.

It would be trite and insensitive to try and draw sweeping conclusions about the role of the CIAC, or in how school sports were affected by the tumultuous nature of this year. Yet no comprehensive discussion of the 2012-13 school year would be complete without a cursory look at the challenges faced by schools over that time, to try and gain perspective on what those involved have overcome.

Looking through the laundry list of bizarre events the schools in Connecticut battled through for the 2012-13 the school year seems almost unbelievable when listed all in one place. There may be no way to definitively answer if this period is the most tumultuous in CIAC history, but from the perspective of one educated observer it is high up on the list.

For CIAC Associate Executive Director Paul Hoey this past year marked one of the strangest in memory.

“I’ve been doing this for a long time and I don’t think we’ve had these type of significant weather events before that has forced major changes,” CIAC Associate Executive Director Paul Hoey noted. “This was two years in a row we have had to adjust the fall tournament dates, and ultimately those have worked out well with weather cooperating when we were able to play them. But it is not something we want to do on a permanent basis.”

After a quiet few months, the oddness began when the calendar turned to November. For the second time in as many years a hurricane descended on the region and caused wide-spread damage and disruption. Many schools were closed for more than a week dealing with the aftermath while others were forced to completely evacuate their buildings as a result of the damage. For many, academic life did not return to normal for weeks if not longer following the storm.

After reviewing the situation, and fostering lengthy discussions with schools and tournament directors, the CIAC elected to alter the tournament schedule for each of the fall championships with the exception of football. Though inconvenient, the schools all adapted and the bulk of the championships took place the weekends surrounding Thanksgiving. Football itself was not immune from the weather as some mid-week storms caused postponements of quarterfinal games, leading to many semi-final games taking place on a Sunday.

Hoey explained that the process begins by collecting as much data as possible to determine exactly what schools are facing in terms of completing their schedules.

“Fortunately with the on-line reporting system [CAS-CIAC Director of Technology Services] Matt Fischer has put in place we can easily get the data to see how many games still need to be played, how many days are still available for games to be played, and how many schools are impacted. When we have that information we try to make decisions about what is the best course of action.”

No decision is ever made easily and the various possibilities are weighed carefully, as is the necessity of altering the schedule, how exactly the schedule might be changed, and any other factors that might come into play. The goal is to be fair to all the parties involved and to provide the best possible experience for students and fans.

“There are always going to be questions about why dates are chosen, but we try to take everything we can into consideration,” Hoey explained. “We were asked why we waited to play the finals after Thanksgiving rather than early in the week, and the answer is that schools plan lots of non-athletics activities for those days, and there is an effort to be respectful of that.”

Though the challenges presented by the weather were no doubt significant, they pale in comparison to the emotional and psychological hurdles presented in the aftermath of the horrific tragedy at Sandy Hook Elementary School in mid-December. Though not directly involving athletics, or even high schools, the tragic loss of life sent shockwaves and heartbreak throughout the state, and left schools in position to provide much-needed counseling for students and to address security questions for each institution. That included schools discussing and studying logistic and necessary safety measures for athletic competition when many visitors are present. 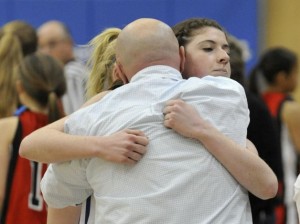 The CIAC had no official role trying to help schools and districts deal with the immense challenges presented by Sandy Hook. Instead as CAS-CIAC Executive Director Karissa Niehoff noted, the goal is to provide support and comfort in any way possible.

“After a tragedy like Sandy Hook occurs, it just rips everyone’s heart out. At that point the only thing our organization can do is to make ourselves available with resources, support, or even the availability of our facility for camaraderie. In times like that I think people just want to feel like they are not in this by themselves.”

After those sobering developments extreme winter weather seems trivial by comparison. Yet after the Sandy-related developments of the fall, winter weather showed it was not going to be outdone and proceeded to continue and provide weather challenges for the CIAC and its member schools. Just as the winter championship season was to commence, the biggest snow storm to hit the state in half a century overwhelmed the state and shut down schools yet again.

Championship schedules were again greatly impacted, in particular the indoor track & field championships which were scheduled and rescheduled approximately five times over the course of a few days. The storm also forced a compacting of the winter season creating a challenge for schools to fit in the remainder of its regular season games and league championship games. Fortunately the resourcefulness of the schools and valuable contributions from volunteer site directors to allowed the championships to finish on schedule. 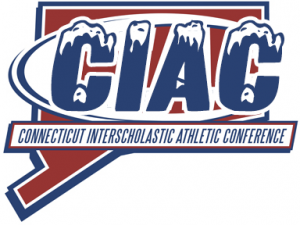 The extreme winter weather during championship season prompted the creation of this version of the CIAC logo.

“It says a lot about the flexibility of our membership and willingness of the schools to help out that we were able to get all the basketball games in on time,” Hoey said. “In the end with we were able to keep the schedule. Schools worked together and athletics directors have been very cooperative with each other. To see when people help each other out to benefit the students is what we always hope for.”

Ironically, it was the normally unpredictable weather and the challenges it creates that were the most predictable element of the 2012-13 championship year. In perfectly fitting a year in which the weather was a constant thorn in the side of the championship participants, a rain storm and soggy fields provided one final delay pushing back the baseball and softball championships. In fact, it seemed perfectly appropriate that such a strange year would see the final championship contest (softball class L final) completed three days after it was originally scheduled.

In the end it was the spirit of cooperation and camaraderie serving the association well throughout a year that proved as trying as any in recent CIAC memory. The challenges of extreme weather and tragedy may well be a lasting legacy years from now about the 2012-13 school year. Hopefully there will be room for a footnote about how the CIAC membership demonstrated the sort of cooperation, flexibility and dedication that allowed hundreds of students to produce memories that will last a lifetime.