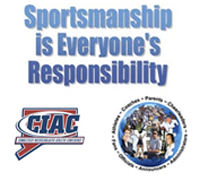 CHESHIRE, Conn. – The CIAC will host its 2013 Sportsmanship Conference, featuring keynote speaker A’ric Jackson and breakout sessions with the Positive Coaching Alliance, on November 21, 2013 at the Aqua Turf Club in Plantsville, Conn.

On-line registration is available now at www.casciac.org/register. CIAC member school student leaders, team captains, athletes, coaches, athletics director and school administrators are all encouraged to attend, though schools should only submit one registration request with all their attendees. The cost is $30.00 per registrant and includes the workshops and lunches. Those interested are encouraged to register early as space is limited to the first 600 registrations, with those registering after the cutoff point being placed on a waiting list.

The conference will run from 8:15 a.m. to 1:30 p.m. and will begin with a keynote address from renowned speaker A’ric Jackson whose mission is to “T.I.E.” – Teach, Inspire, and Encourage all those who hear him.