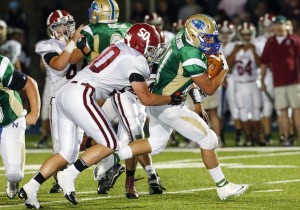 In its first home football game of the season, the Newtown football team wore green jerseys in memory of those lost in the Sandy Hook shooting. MaxPreps photo by Matt Dewkett.

The tragic shooting in at Sandy Hook Elementary School in Newtown, Conn., has brought the community closer together. Even though it occurred on Dec. 14, 2012.

The game was Newtown’s first home game since the tragic events of last December that killed 26 people.

According to MaxPreps photographer Matt Dewkett, Newtown’s jerseys said Sandy Hook on the front, “Stay Strong” on the back, and also featured a memorial ribbon.

Read the whole story and see the photo slideshow at MaxPreps.com

Filed Under: MaxPreps
← CIAC Board of Control Report – 9/19/13
Southington Football Has Leader At Quarterback →