Southington Football Has Leader At Quarterback 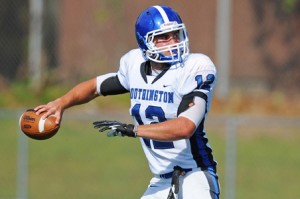 Stephen Barmore has had a long career as the starting quarterback for Southington (CT). It began midway through his freshman season, at age 15.

His numbers, which include more than 4,000 yards passing, 39 touchdown passes and a 22-3 record as a starter in about 3 1/2 years, are impressive, but his leadership qualities rank as high, if not higher.

A defining moment came last season against Manchester on the road in Week 9. Southington, 8-0 and driving toward a playoff spot in highly competitive Class LL, trailed late in the game at 12-7 against a tough and resurgent CCC opponent (6-2 at the time). The Blue Knights had one last chance with one minute, 40 seconds remaining.

“It was a tough game for us offensively,” Southington head coach Mike Drury recalled. “We really weren’t clicking.”

“We were trying to maintain a perfect record, and it was not one of our best games by far,” Barmore said.

Southington took over on its 30-yard line. Barmore methodically drove his team down the field in the Blue Knights’ spread offense. He converted three times on fourth-down situations, and found himself on Manchester’s 30-yard line with 1.2 seconds left in the game.

Barmore went deep on a fade into the end zone and hit senior Cobin Garry for a touchdown with .01 seconds showing on the clock for a 13-12 victory.

Read the whole story at MaxPreps.com.