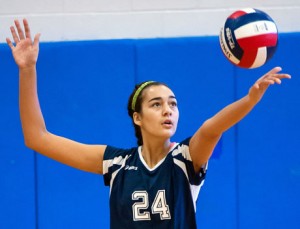 Madison Canestrari has been a big part of a balanced Ledyard team that is primed for another state title run. MaxPreps photo by Ken Rutt.

After winning its first state volleyball championship last year in its first appearance in a CIAC final, Ledyard (Conn.) moved up in class from M to L for the 2013 season.

It hasn’t affected the Colonels’ performance yet. Being the smallest Class L school – seven players over the limit – Ledyard still ran off a regular-season record of 19-1, plus wins in the quarterfinals and semifinals of the Eastern Connecticut Conference tournament.

On Thursday night, Ledyard improved to 22-1 by winning the ECC playoff final against Woodstock, avenging its only loss of the season with a 3-2 triumph.

“(The move up) turned out really good because I think we’re a Top 10 team in the state,” said first-year head coach Rich Duwelius, who took over for Shirley Karkow.

“We won the M tournament last year and we have seven of our top players back. We had mainly sophomores and juniors last year so that gave us an advantage in the early going. Now, the rest of the ECC is catching up as the season goes along.”

Duwelius said his squad has no one outstanding player that it always looks to, but thrives on talent across the board.

“Our team is a balanced team,” Duwelius said. “We rely on a lot of different players. You can look at our stats and you can see how the attacking distribution is. A lot of the teams I’ve seen have one, two, three good players. I think we have at least six. We don’t have to cover for anybody.”

Filed Under: MaxPreps
← Sign Up For CIAC Tournament Updates
NFHS Responds To Report On Sports-Related Concussions →