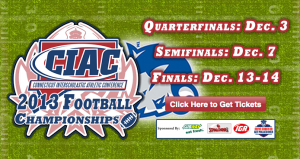 CHESHIRE, Conn. – The online application for media credentials for the CIAC football semifinals at the eight sites on Saturday, December 7 are now available for submission online at the following link: http://casci.ac/825. Media planning to cover a semifinal game should complete the online application for credentials by 12 p.m. Friday, December 6.

Completion of the online form will put those identified on a pass list at the appropriate site, where passes will be given out. Media entities planning to provide radio broadcasts of semifinal games must complete the online credential form, as well as the Broadcast Application Form which can be found at http://casci.ac/826.

Following the semifinal round, the CIAC will host the CIAC Football Tournament Press Conference on Tuesday, December 10 at the AquaTurf Club, in Plantsville. The program will begin at 11 a.m. and will provide time for interviews with athletes and coaches from the finals qualifying teams. Media members planning to attend the press conference should contact Joel Cookson via e-mail at jcookson

A separate media credentials link for the football finals at Arute Field at Central Connecticut State University December 13 and 14 will be provided shortly after the schedule for the four state final games is announced.