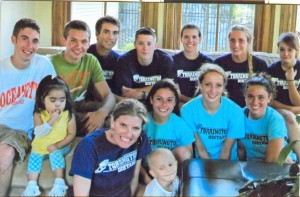 What a week, and what a group of links in this week’s edition of Linked Up. Some national stories, some local stories, some looks at recent champions, and everything in between. Even a brief look towards some spring sports is part of this big edition.

From GameTimeCT: Torrington track & field coach Jada Mattiello has worked to show her athletes a world outside their own.
From the Minneapolis Star Tribune: A student shows everyone the joy of competition.
From WFSB.com: A look at Tolland basketball standout Chelsea Domian and the bond she shares with her sister Alyssa.
From the Norwalk Hour: It was an ending worthy of a Hollywood script for Fairfield Prep swimmer Nick Wargo.
From the Hartford Courant: Windsor’s Cody Quinn was cool in the moment to help his team seal a state title.
From the Connecticut Post: A look back at some of the top basketball games of the past season.
From the Waterbury Republican-American: Sacred Hearts run to the class S championship was not without challenges.
From the Amarillo Globe-News: An incredible story of a coach winning a title shortly after the death of his wife.
From Litchfieldcountysports.com: Even a few days later, the haze of the celebration is still there for the Thomaston girls basketball team.
From the New Haven Register: The Branford Unified cheerleading team inspired the crowd.
From the New Britain Herald: Part of Capital Prep’s girls basketball title had its roots in New Britain.
From the New London Day: The state championship might just mark the beginning for the New London girls basketball team.
From the Norwich Bulletin: An interesting look at the history, and perhaps the future, of New England championships.
From the Meriden Record Journal: Local official Ron Patry is being honored for his career achievements.
From The Ruden Report: Bridgeport Central coach Barry McLeod found a team he could love with this year’s Hilltoppers squad.
From the Bristol Press: The St. Paul cheering section earned quite a reputation during the team’s playoff run.
From the Sacramento Bee: One writer’s perspective on the importance of keeping athletics programs as part of the scholastic experience.
From the Stamford Advocate: An early look at how the FCIAC lacrosse season might shake out.