Ridgefield Lacrosse Making Waves In & Out of State 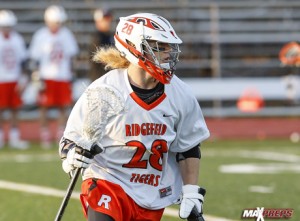 Brad Alexander and his Ridgefield teammates have some impressive wins on the ledger this season. MaxPreps photo by Matt Dewkett.

RIDGEFIELD, Conn. – The Ridgefield boys lacrosse team has progressed in recent seasons to elite status in one of the nation’s most competitive conferences, the Fairfield County Interscholastic Athletic Conference.

The Tigers jumped out to a 9-0 start last season and finished 17-4, falling in the semifinals of both the FCIAC and CIAC Class L tournaments. This came after back-to-back state title-game appearances, with the Tigers winning it all in Connecticut in 2011.

But coach Roy Colsey’s Tigers have risen to the level of a program that reloads and doesn’t rebuild.

Read the whole story at MaxPreps.com.