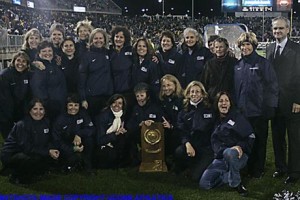 CIAC Girls Lacrosse Tournament Director Cindy Dysenchuk was herself a decorated athlete with the UConn field hockey team, including being part of the 1981 national championship team. Photo courtesy of UConn athletics.

For the first time in nearly a decade, the CIAC girls lacrosse tournaments opened play this past week without Cindy Dysenchuk overseeing the action as tournament director. It certainly is not due to a lack of commitment to girls lacrosse, but rather the opportunity to excel in another one of her passions proved too much to resist. In this case she traded watching lacrosse sticks to taking up a field hockey stick and taking part in the International Hockey Federation (FIH) Masters World Cup in Rotterdam, The Netherlands (Tournament website).

Dysenchuk has been a longtime contributor to the CIAC and high school athletics in Connecticut, as she joined the CIAC Girls Lacrosse Tournament Committee as the chairperson for the 2004-05 season and has also been a dedicated member of the Glastonbury physical education department, and coach within the athletic department. However before her professional career as a teacher, coach and contributor began, she made quite an impression as a student-athlete at both Glastonbury and the University of Connecticut. Her time at UConn included some history as she and her teammates won the 1981 NCAA Field Hockey Championship, the first women’s national championship (in any sport) in the history of NCAA athletics.

Now in 2014 she will get a chance to show off her skills against some of the best in the world as a member of the USA Over-50 Masters team at the event in Rotterdam. The competition which features Masters competition for men and women in a variety of age groups competing from June 5-13. Dysenchuk’s team is one of seven competing in the women’s over-50 competition. The event is also being held in conjunction with the traditional Hockey World Cup (Website) which also runs until June 15 in The Netherlands. It’s an opportunity to play with, against, and watch some of the top field hockey players in the world, and one that was too good for Dysenchuk to pass up.

“We were thrilled that Cindy got this opportunity to take part in such a great event, and absolutely understood her desire to miss the CIAC Tournament this year and play at the World Cup,” CIAC executive staff member and girls lacrosse liaison Joe Tonelli said. “Obviously there is a lot going on with the tournament right now, but Cindy did a ton of work ahead of time to make sure everything was in place before the tournament started. She has been a huge asset to the tournament and to the growth of girls lacrosse over the years, and left us in a position where we could survive without her for one tournament.”

The CIAC Tournament has gone on without the familiar, steady hand at the helm, with the semifinals taking place today at five sites. And sure, it will look a little strange to have a different face at the championships at Bunnell on Saturday handing out the trophy. After everything Cindy Dysenchuk has contributed to the CIAC and girls lacrosse over the years, she was due a vacation, even if it is one plying her own athletic skills in another part of the world.