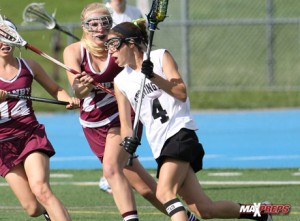 STRATFORD, Conn. — This season was the first time in the 15-year history of Stonington girls lacrosse that they were a fully funded program.

Stonington made sure the money was well spent. It came from behind in the final 10 minutes to beat Granby on Saturday, 13-10, to win the CIAC Class S championship at Bunnell High.

It was the program’s first state title in its first championship game appearance.

“My first five years, I was a volunteer. I didn’t get paid at all,” said Stonington head coach Jeff Medeiros, now in his 14th season with the program. “I had to fund-raise for my whole career for this program.

“It’s neat how it’s progressed. Here we are, finally, a fully funded program. I even got a stipend going into next year, so I guess it’s fitting that we’ve given them a state title.”