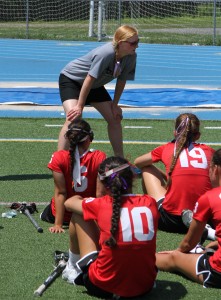 In a jam-packed week of CIAC Championship events there were a lot of big moments to garner attention for fans in attendance or watching live on the NFHS Network. Clutch goals, big-time saves, walk-off home runs, record-breaking times is just a partial list of the of the great performances worthy of celebration. Even with all the great plays and fantastic moments, the one that caught our eye didn’t happen on the field, it took place on the sideline. It obviously didn’t win the match, but it left a lasting impression on at least one spectator.

The scene begins on the second leg of a four-stop trip to check in on all of Saturday’s CIAC Championship sites. Arriving at Bunnell High School after a first stop at Brien McMahon High School for some boys lacrosse competition, it was exciting to discover the class M final between rivals Wilton and New Canaan was about to head into overtime. I didn’t know the back-and-forth drama that took place prior to the first of two three-minute overtime sessions beginning, just that Wilton was striving to snap a two-year title game skid against this Rams team. The Warriors took a big step in that direction by controlling the first overtime draw and promptly breaking the 5-5 tie with a goal from Annie Cornbrooks. New Canaan looked poised to respond by winning the ensuing draw and moving down the field, seemingly ready to knot the match back up at six, after securing a free position attempt. Wilton’s defense had other ideas, as the Warriors and goalkeeper Hannah Wiltshire denied a Rams scoring attempt and drew a foul that gave them back possession. From there Wilton took control, rolling back up the field to score again and take a two-goal lead that would get no slimmer the rest of the way. Wilton claimed the title, the program’s third and first since 2006, and the celebrations, pictures, smiles, and hugs commenced.

But wait, back up a second. We missed the moment. It came in that blank space, as interesting moments often do, between Wilton’s first and second overtime goal. It came when New Canaan’s Madeleine Gertsen had her tying shot attempt thwarted, and then committed a penalty, sending her off the field. Standing behind the New Canaan bench, you could sense the feeling that an opportunity was lost and that the Rams just opened the door for Wilton to barge through and earn a title. It was a clear turning point, and the disappointment on the face of Gertsen as she came to the sideline after being issued a card suggested she knew it. Rams coach Kristin Woods certainly knew it as well. 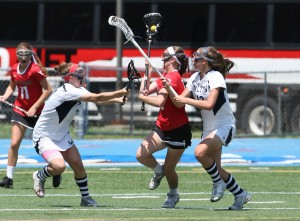 The CIAC class M final provided intense and compelling moments on and off the field. MaxPreps photo by Todd Kalif.

At that moment, with Gertsen walking towards the sideline, I admit I feared the worst. The “worst” meaning a frustrated coach taking out that frustration on a player already upset and likely down on herself after the results of the play. What happened instead proved my fears could not have been more unfounded. Woods put an arm around her player, providing support rather than criticism in that moment. From where I was standing I couldn’t hear the message relayed to Gertsen but I imagined it contained thoughts on staying positive and having the chance to still impact a match that was not yet over.

This was not a Hollywood moment, as it did not immediately follow with Gertsen bursting onto the field after the penalty interlude and quickly netting the winning goal. Instead, just as it appeared, New Canaan was never able to fight its way back into the match. But it was a compelling moment all the same in clearly illustrating the many roles and coaches employ. There are certainly times when athletes need to be pushed and motivated by a coach, but just as importantly they must also be buoyed and comforted after mistakes are made. When push comes to shove I would much rather see a coach comfortable with the latter strategy than the former. It doesn’t mean the coach is soft, or somehow doesn’t want to win or make the players better. It suggests the coach has the proper perspective on their role and the kind of impact they can provide. This is especially true at the scholastic level where we are dealing with high school students who are learning every day from their experiences (this might also be noted for the fans at the match who felt it appropriate to belittle the timer who had trouble with clock issues in the final minute of overtime). I don’t know what the player learned or took away from that small moment among many others in that game, but I was happy to see a coach seemingly with the proper perspective in a tense situation.

As sports fans we see the headlines and read the stories when coaches do the wrong thing. Fortunately, more often than not, coaches are doing the right thing. And it’s just as important to make that a story as well; highlighting how a generous and thoughtful moment can stand out among a weekend of highlights.