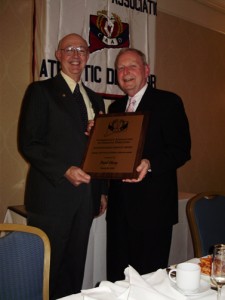 An award designed to honor individuals who have made contributions to the NFHS, state high school associations, athletic director and coaching professions, the officiating avocation and fine arts/performing arts programs, the NFHS Citation is one of the most highly regarded achievements in high school athletics and performing arts.

Hoey has served as associate executive director of the CIAC since 2004 after a 35-year career as a teacher, coach, assistant principal and principal at four Connecticut schools.

In addition to serving as CIAC liaison for soccer, football, basketball, baseball and golf, Hoey handles all eligibility appeals and game officials’ contracts. He also coordinates the CIAC sportsmanship and cooperative team programs.

During his years as a high school principal, Hoey chaired some of the CIAC’s most important boards and committees, including the CIAC Board of Control and Financial Development Committee. He also chaired the Girls State Swimming Committee for 24 years and was a member of the Connecticut Association of Schools (CAS) Board of Directors for six years. Hoey was named Connecticut High School Principal of the Year in 1998.

At the national level, Hoey is president of the Council of New England Secondary School Principals Association, and he was a member of the NFHS Citizenship and Equity Committee from 2006 to 2010.