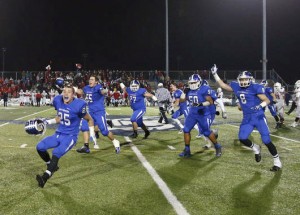 Alex Jamele  earned recognition as one of the top returning receivers in the country after helping Southington to a state title last season. David Butler II – Hartford Courant.

They combined for a staggering 917 receptions for 16,017 yards and 208 touchdowns in a single season.

And there are only 10 of them.

Those are the cumulative statistics of the top 10 receivers nationally (based on yards) returning from the 2013 season.

Here’s a capsule look at all 10. The yards numbers aren’t the only impressive ones. Check out the catches, routes and speed.

Among them is Southington High School’s Alex Jamele who helped the Blue Knights to the class LL title in 2013.