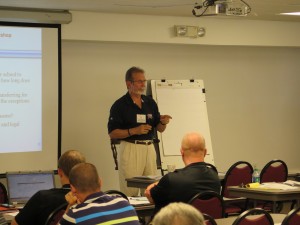 Wysowski joined the CIAC staff after a lengthy tenure as an educator and administrator. Most recently he spent 10 years as Principal at Coginchaug High School followed by a lengthy tenure as Bristol Eastern High School principal prior to his retirement. He also worked as a coach, teacher and assistant principal during his career and has extensive experience as a member of CIAC committees, including membership in the CIAC Board of Control. He received the CAS Citation in 2011 in recognition for his service to the organization.

Synnott joined the CIAC and Unified Sports® staff in 2010 after a 41-year career as an educator, the majority of it as an administrator at Berlin High School. He also has extensive experience as a high school coach, and in working with CAS-CIAC committees prior to joining the CIAC staff. As Assistant Director of Unified Sports® he was responsible for tournament operations as well as outreach. He worked in the area of public relations to recruit new schools into the program; train Unified Sports® coaches and volunteers; and assist in coordinating all Unified Sports® events.

Hale concluded a 20-year stretch as principal at Westbrook High School when he retired this past spring and enjoyed a lengthy career as a teacher and administrator while also serving as a significant contributor to CAS. He received the CAS Citation in 2004 and was recognized as the Connecticut High School Principal of the Year in 2006. He also served on numerous CAS-CIAC boards including a four-year stint as chairperson of the CIAC Board of Control and currently serves as chairperson of the CIAC Field Hockey Committee.

Mengold spent the past 38 years working in the Amity Regional School District before retiring this past spring. For the past 30 years he served as the Director of Athletics for the district, overseeing a department with 85 athletic teams. He was heavily involved with the CIAC, the SCC and Special Olympics/Unified Sports, including serving as the Unified Sports basketball state games site director and as coach of the Amity High School Unified basketball team.