Games To Watch In Week One 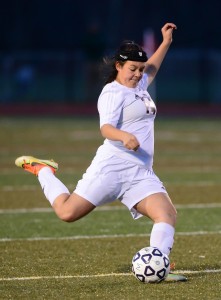 The preseason end is in sight with the fall season kicking off on Tuesday, September 9. While there are so many games on the schedule in that first week it might be tough to distinguish one from another, there were a few that jumped out as particularly intriguing. With the HUGE caveats that these thoughts are based mostly on team success of a year ago, and that things could be drastically different this year, here is one game from each sport to watch in the opening week. Though we strongly suggest you might want to check out more than one game, because why the heck not? There are a ton of games!

Girls Soccer: Haddam-Killingworth vs. Portland. This is not the season opener for either squad, but it should be a thrilling Shoreline Conference match-up between a pair of teams coming off stellar seasons last year. Both of these teams were competing on championship weekend last season, with Portland claiming a class S title along with fellow Shoreline opponent Old Saybrook, while Haddam-Killingworth fell one goal shy of a championship in class M. An early-season battle between conference rivals who were both championship game participants last season seems like a great one to check out.

Volleyball: E.O. Smith vs. RHAM. When last we saw RHAM they were competing in what some observers described as one of the best girls volleyball finals in history, a match the team rallied to win in five thrilling sets (It was so good, the comeback earned a spot on our Top-10 NFHS Network top plays). Now the Sachems begin a defense of that title and get an early challenge from an E.O. Smith team that gamely battled eventual runner-up Farmington in the class L quarterfinals last season. These two CCC foes were a combined 35-3 last year as RHAM went 18-0 during the regular season before running to the state title. E.O. Smith dropped both meetings against RHAM 3-0 last season, so this early-season meeting is a chance for a little bit of payback to get the year off and running. 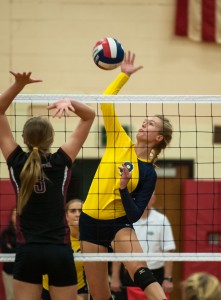 After a thrilling title last year, RHAM gets a tough challenge from E.O. Smith early this season. MaxPreps photo by Ken Rutt.

Boy’s Soccer: Greenwich vs. Ridgefield. Have to hand it to the FCIAC, they don’t waste time scheduling some fascinating matches. Last season Greenwich and Ridgefield finished atop the FCIAC regular season standings, and then met in the FCIAC Championship where the Cardinals claimed a decisive 4-1 win. The Tigers had the last postseason laugh with the squad capturing a share class LL title after Greenwich was knocked out in the semifinals. Now the teams square off in the opening game of the 2014 season. Intriguing, to say the least.

Field Hockey: Lauralton Hall vs. Daniel Hand & Greenwich vs. Cheshire: Simply couldn’t pick just one field hockey game to focus on in week one thanks to both these tremendous contests. Perennially strong Daniel Hand welcomes new SCC member Lauralton Hall into the conference in a game featuring a pair of class M semifinalists from last year. Lauralton is riding a long regular season unbeaten streak while the Tigers were an impressive 14-1-1 last year and this could be the first of many compelling contests between these two programs. Meanwhile the SCC/FCIAC challenge is getting plenty of attention in football, but how about in field hockey as Cheshire and Greenwich square off after Cheshire prevailed when the two teams met in the class L semifinals last year. The Cardinals and Rams were a combined 27-4 in the regular season last year and though both lost some key players to graduation these are programs that will not surprise anyone if they are making deep postseason runs again.

Football: Capital Prep/Achievement First vs. Quinebaug Valley: There are lots of high profile week one football games to start this season (you can hear about several of them on this CIACcast), but this one might be slightly off the radar despite featuring a pair of teams that were playoff qualifiers last year. Capital/Achievement First is out to prove its credentials after earning the top seed in class S last year by going 11-0 but then falling in the opening round of the playoffs. One of those wins came against Quinebaug Valley by a score of 43-10, one of only two losses the team suffered on its way to earning a class M 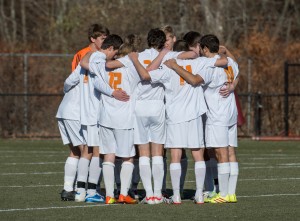 Ridgefield gets a test against familiar foe Greenwich to open the season. MaxPreps photo by Kathy Kickling.

postseason berth. Should be a fun contest for two teams off the radar in a game that could come into play later in the season with playoff points starting to come into focus.