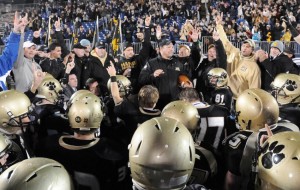 CHESHIRE, Conn. – The sites and times for the 2014 CIAC Football Championships has been determined. The eight football champions will be crowned at three separate sites Friday December 12 and Saturday December 13.

Veteran’s Stadium at Willowbrook Park in New Britain will host four championship games with one game Friday December 12 and three games December 13. Arute Field at Central Connecticut State University and Ken Strong Stadium at West Haven High School will each host two championship games on Saturday December 13. The Friday night game at Veteran’s Stadium will take place at 6:30 p.m. and Saturday’s tripleheader games will run at 10 a.m. 2 p.m. and 6 p.m. The doubleheader games at Arute Field and Strong Stadium are scheduled for 10:30 a.m. and 2:30 p.m.

The determination of which championship game will be held at which site and time will take place following the completion of the semifinals, which will be held at the sites of the higher seeds on Saturday December 6

The CIAC Football Media Luncheon will be held Tuesday December 9 at the AquaTurf Club in Plantsville. The event is open to media members and representatives from each of the finalists should be in attendance.

The CIAC had held football finals at a variety of sites throughout its history prior to 2010 which marked the first year all of the football finals were held at the same venue. The CIAC Football Committee and Board of Control approved a change to eight football championships in 2014 with two-rounds of playoffs. All eight football finals will be broadcast on the NFHS Network and selected games will be shown live on CPTV Sports.

CIAC is also looking for media members interested in covering the football finals for CIACsports.com with game stories and previews. Any interested media member should contact Joel Cookson at jcookson