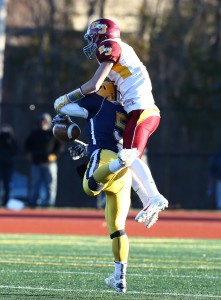 NEW BRITAIN — No team this season had even come close to what St. Joseph wanted to do in Saturday’s Class M-Small championship game at Willow Brook Park.

But the Cadets limited Ledyard to only seven points as St. Joseph won its 12th state title with a 37-7 victory over the Colonels.

“We thought we could hold them down pretty well,” St. Joseph coach Joe DellaVecchia said. “Our defense is pretty good. Take away one game (a 41-14 loss to New Canaan) and we’ve been playing well on that side all year.”

The Cadets limited Ledyard to 322 total yards, but more impressively they held JoJo Shumaker to 95 yards on 20 carries. He was the focus of St. Joseph’s defensive game plan, and the Colonels used Shumaker less after he was bottled up early.

“I thought we had them scouted pretty well,” DellaVecchia said. “We wanted to take away Shumaker on the stretch play. I thought we shut that down pretty well all day. They had a few runs on the first series, but our key was to shut them down.”

St. Joseph raced out to a 21-0 lead in the second quarter. The first big strike was a 91-yard run by Mufasha Abdul Basir, which gave St. Joseph a 7-0 lead with 1:38 remaining in the first.

The Cadets added a pair of scores midway through the fourth when Lars Pedersen leaped over double coverage in the end zone for a 32-yard catch from Cory Babineau, and Abdul Basir tacked on a 31-yard run to make it 21-0 with 4:48 left in the half. 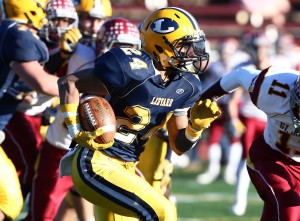 Ledyard had its opportunities to tighten up the game. The Colonels got on the board when they converted on a fourth-down and utilized a screen pass from Ty Ebdon to Shumaker for a 34-yard touchdown.

Phyllip Thomas picked off a pass in the end zone to send Ledyard into the locker room with some momentum facing a 21-7 deficit.

The Colonels failed to take advantage of key opportunities to start the third. They turned over the ball on downs on two straight drives inside the St. Joseph 15-yard line, and Pederson picked off Ebdon to end a third drive.

“We had a couple opportunities to get ourselves within a touchdown, but we just came up short on some big third- and fourth-down plays,” Ledyard coach Jim Buonocore said. “I think the story of this game was the St. Joseph defense. They contained JoJo on the perimeter and their secondary tackled about as well as I’ve seen all year on film. They tackled tremendously well.”

To DellaVecchia, those stands epitomized his team’s grit.

“That’s character. That’s playing with heart and emotion,” DellaVecchia said. “Our kids did a great job of reading keys and playing with emotion. They were unbelievable.”

St. Joseph took the momentum for good when Ledyard fumbled a punt at its own 11 with 10:25 left in the fourth. Marc Mrozek’s 28-yard field goal made it 24-7, and the Cadets added late touchdowns by Pedersen (3-yard run) and Mrozek (52-yard pick-six) to account for the final margin.

The Colonels lost their third straight championship appearance, with other losses coming in 2011 and 2008. Ledyard last won a state title in 2007.