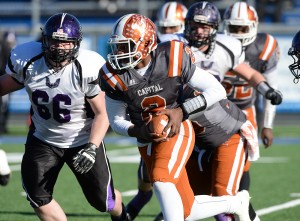 Capital Prep (12-1) wins its first state championship in school history and the first for the Constitution State Conference.

“I think it means a lot for our program,” Capital Prep coach Chris Fulton said. “We play some quality teams and we have some quality coaches in our league. Obviously we don’t have as much depth, but it’s great for the league and great for us for sure.”

North Branford (11-2) was searching for its title since 1979 and has now lost in its last three attempts in the final.

The Trailblazers forced seven North Branford turnovers and held the Thunderbirds without a point in the second half. North Branford quarterback Paul Pastet was also sacked six times.

But the Thunderbirds were able to stop Phillips on consecutive goal-line rushes to get the ball back trailing by seven with 3:20 left. 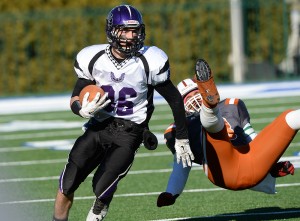 North Branford was able to drive from its own 1 to the Capital Prep 27, then got pushed back due to a holding penalty and a sack. On fourth down and 33, Pastet (12 of 23, 162 yards hit Shelby Franklin (game-high 111 yards rushing) for a completion well short of the first-down marker.

But a live ball personal foul was called on Capital Prep, allowing the Thunderbirds to retain possession and now have a 4th and 2 from the 29. But Capital forced an incompletion to clinch the crown.

Nick Sagnella (28 yards) and Pastet (1) had both rushing touchdowns for the Thunderbirds.