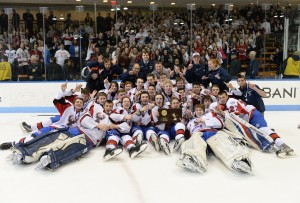 NEW HAVEN – E.O. Smith/Tolland had a taste of what it was like to be in the CIAC Division III boys hockey final last season, losing to Newtown in overtime.

On Saturday, the Bucks, on a mission to get back to the final this season, experienced the taste of victory.

Peter Mayer scored four goals and Matt Schoen made 32 saves to lead No. 1 E.O. Smith to a 5-2 win over No. 2 Masuk at Ingalls Rink for the Bucks’ first state championship.

“This is a dream becoming reality,” Mayer said. “I still don’t believe I scored four goals, I can’t believe this just happened. I am just so thankful to have the linemates that I have, they set me up for those goals.

“It might look one-sided but Masuk is one of the best teams we played this season. This is a great feeling. This is our first championship but it is going to be the first of many.”

“Masuk is a team that scores quick so we knew we had to try and get the jump on them early,” E.O.Smith/Tolland coach John Hodgson said. “The key for us this time around in the final is our experience. Being here last year helped prepare us for this game.

“Peter had a great game but he’s been doing it for us all season. He’s scored a lot of big-time goals for us.”

The Bucks set the tone of the game in the first period with three unanswered goals. 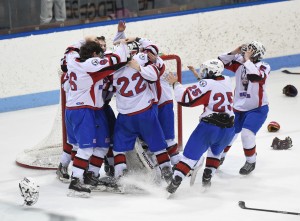 Peter Mayer scored off a three-on-three breakaway down center ice at 2:42 for a 1-0 Bucks lead. Mayer scored his second goal at 7:21 for a 2-0 lead and 29 seconds later his brother Nick Mayer made it 3-0 off a wrist shot in front of the left post.

Shane Dushay had three chances to score for the Panthers, including a wide open shot at the right point. But Schoen made a stick save each time.

With 17 seconds to go in the first period, Shane Dushay (hook) and Charles Cristo (slash) were both called for penalties. The penalties gave Masuk a prime chance to score to start the second period with a five-on-three advantage with 1:43 left in the penalties.

Mayer went on to score his third goal, a power-play goal, at 1:40 of the second period. He scored off a rebound in front of the right post to give the Bucks a 4-0 lead. Mayer scored again with 1:02 to go for a 5-0 Bucks lead at the second intermission.

Masuk actually outshot E.O. Smith 15-8 in the second period. The Panthers turned up their intensity the last nine minutes of the second period and had eight wide open shots on goal. But Schoen made the save each time.

The Panthers finally got a puck by Schoen in the third period.

But Schoen came up with three quality saves the rest of the way to linit the Panthers’ late rally.

“We had our opportunities and chances,” Masuk coach Andy Townsend said. “We just needed to execute better. Peter Mayer is talented player with a lot of skill. If you give him time and space he’ll score on you just about every time.

“But my kids shouldn’t hang their heads low. After that first period we played great. I’m proud of my guys and what they accomplished to get to the final.”