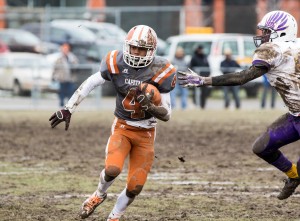 Capital Prep/Achievement First is one of many cooperative teams to make the most of its opportunity for participation. MaxPreps photo by David Newman.

Editor’s Note – CIAC 101 is a regular feature that provides in-depth detail on the processes and procedures within the CIAC.

Cooperative teams, or “co-ops” first came to the CIAC in the early ‘90s. Like any innovation or change, the idea seemed foreign at first, before becoming an accepted part of the high school sports landscape in Connecticut.

That’s precisely where we are now. Twenty-five years after the first co-op took the field, the numbers have grown to the point where almost all CIAC-sponsored sports feature at least one co-op. The teams have become commonplace in the world of high school sports, so much so that many fans and perhaps even coaches and athletes do not have a great understanding of what co-ops are all about, and why they exist at all. Which means it is a perfect topic for exploration in the first installment of CIAC 101. This edition will work to explain how and why cooperative teams are formed, the process by which they are reviewed and examined, and some of the challenges inherent in having the teams be a part of the CIAC picture.

This is probably the best place to start: cooperative teams – for those unaware, a co-op is a team made up of student-athletes from multiple schools – are permitted because they give opportunities for athletic participation to students that they would not otherwise have. That is the simple reason that cooperative teams were first allowed within the CIAC by-laws, and it remains the reason they exist as part of the CIAC today. Allowing cooperative teams are intended create even more athletic participation opportunities than a school cannot support on its own. It is a simple and relatively straightforward purpose and the implementation has allowed for hundreds of students to be a part of interscholastic athletics when they might not otherwise have been able. 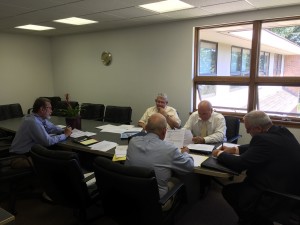 The CIAC Cooperative Team Committee is charged with determining whether co-op applications are approved.

On the flip side, there are a few things co-ops were never intended to be. First and foremost among them is that co-ops are not formed to gain a competitive advantage.  It may be the biggest misconception when it comes to cooperative teams both from the public and the CIAC membership, but the process was never intended to allow teams to strengthen themselves competitively, and the system is built to try and protect against schools using the option of a co-op to gain a competitive edge. But we will get into that a little bit later when we dig into the application process (don’t worry, it will be riveting).

Similarly co-ops are not intended to be cost-saving measures for member schools. While joining another school to support a team might create some financial unburdening for schools, it should never be the primary consideration or impetus for the formation of the program. Co-ops are also not supposed to be about allowing teams to stack a roster with the best players from multiple schools, while denying opportunities for others to participate. Again, the idea for a co-op is to create opportunities for participation that a school simply could not otherwise support.

Now that we’ve covered what cooperative teams are, and are not supposed to be about, the next logical question you surely ask is whether there is any conceivable way to make sure schools are following the spirit mentioned above, if not the letter of the law? Read on, dedicated co-op fans, for some serious cooperative team nuts and bolts.

It all begins with an extensive application process. How extensive? All of the schools participating must provide loads of information about the details of the co-op, paramount among them is specific information on the number of athletes from each school expected to be on the roster for the team. This is where things start to get tricky. Because the application deadlines for co-ops are due well in advance of the season in which they will compete, schools must estimate their rosters based on the information from the previous year. Some schools will also use survey results to estimate its potential roster makeup when they are all able.

The numbers are necessary because the key component in making the determination of whether a co-op application will be approved by the CIAC. Each sport has a specific number of athletes that cannot be exceeded by any of the schools in the co-op if it is to be approved (for a handy chart of those numbers, check out page 65 of the CIAC Handbook). The numbers for each sport were supplied by the appropriate sport committee with the idea that those numbers are the threshold at which a school should be able to support its own team. As that chart suggests schools can submit expected numbers for either 9-12 grade, or just 10-12 as part of the application process. 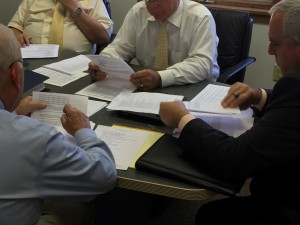 Poring through paperwork is the reality for the Cooperative Team Committee.

All of this information is then analyzed by the CIAC Cooperative Team Committee which then approves the co-op, denies the application, or requests more information. The co-ops can be approved for one or two years, and then must re-submit each time the team is up for renewal. The applications and numbers must be provided every time, though the CIAC is happy to report it is working on creating a more extensive on-line form that streamlines the process. Still, as the picture to the right suggests, this is not a process without a great deal of effort for the member schools, and for the Committee. It probably raises the question of whether all these details are necessary. The answer hearkens back to the idea of why co-ops exist as part of the CIAC in the first place.

In an effort to insure that co-ops are being formed for the legitimate purpose of providing athletic opportunity where none would otherwise exist, the process needs to be a little arduous. Numbers need to be provided, and then verified. Because the eligibility lists of schools are available to the CIAC and Committee members, the Committee can see if a proposed co-op roster suddenly has lost athletes that competed the previous season. The Committee will often directly follow-up on those types of questions, asking for specific explanations of why particular numbers are down, or why the team is expecting a surprisingly low number of incoming freshmen. Schools are required to commit to a no-cut policy when they form co-ops to both maintain the legitimacy of their numbers and to make sure participation is not sacrificed with the co-op.

This is all to say that an attempt is made to cover as many details as possible to both respect the spirit of the by-law and to protect the rest of the membership from having to compete in an unfair playing field. Forcing the co-ops to renew the application at least every two years allows the Committee to have a near-constant handle on whether or not teams still fit within the legal roster limits for a co-op. Because the hope with cooperative teams is that programs might be able to support their own program after forming a co-op, teams may actually add players beyond the allowed co-op numbers before their next review period.  When a squad moves over those limits, they are given one or two years to phase out the co-op arrangement depending on their numbers and hopefully move on to either find another school with which to partner, or in a perfect world, support its own team. The Committee also on occasion has prevented dissolution of co-ops if the attempted change is not by mutual agreement of all the schools.

This probably all seems like a lot of stuff and the phrase “a perfect world” in the previous paragraph is somewhat ironic when it comes to cooperative teams. In a perfect world every school would have the ability to support any and all athletic teams its students desired, and there would be no need to pore over eligibility lists and project returning athletes and all of the other processes that go into determining approval for cooperative teams. But that’s not the reality.

Reality is that for 25 years cooperative teams have been a part of the fabric of CIAC, and have provided an opportunity for athletes to compete where opportunity might not have existed. Old Saybrook and Westbrook formed the first co-op when their football teams joined together in 1990. This past fall, for the first time cooperative teams won CIAC championships in football as Valley Regional/Old Lyme and Capital Prep/Achievement First both earned titles. As we’ve explained a lot of time, energy, and details went into the formation of those co-ops and the other 83 teams that competed last season. Being able to provide all those athletes with competitive opportunities and the memories and benefits that go with it suggests it was, and is, worth the effort.