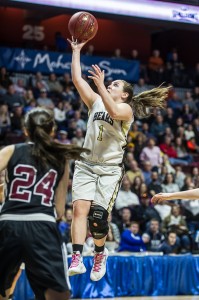 UNCASVILLE, Conn — The Canton Warriors made the most of their second chance Saturday.

“It’s amazing,” Treacy said. “ I have no words for it. I know everybody wanted it. I wanted it. It’s my last game of my high school career and I wanted to make it count.”

Junior Emily Briggs had 18 points and nine rebounds for the third-seeded Warriors (21-6), which lost to the Bears in last year’s final (52-50).

“That makes it a million times better,” Treacy smiled.

Thomaston was playing in its fourth straight Class S final and had won the previous two.

“Our seniors have been amazing,” Golden Bears coach Bob McMahon said about the team’s four-year run. “The saddest part is not losing this game. The saddest part today is it’s the last time they (the seniors) put the uni on. They just addressed their teammates like mature, young women. I’m just proud of everything they’ve ever done.

“As far as a four-year run, I hope it ain’t over. We’ve got some quality players coming back.”

Canton opened the second half with an 8-2 to run to slowly pull away from Thomaston. Treacy started it with a jumper, followed by a three-point play by senior Emma Charron and Skinner’s 3-pointer, to give the Warriors a 30-21 lead with six minutes, 22 seconds left in the third quarter. 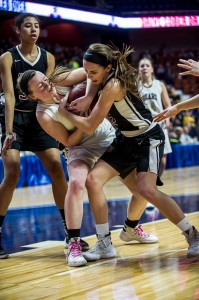 McMahon said, “They got in our face and made us uncomfortable. That’s the best we’ve faced all year. They really came to play. Hats off to their championship effort.”

Canton put the game away at the foul line in the fourth quarter. Briggs starting it with four straight free throws to extend her team’s lead to 46-33 with over six minutes left in the game.

The Warriors made 16 of 24 free throws in the fourth quarter. Thompson attempted 18 free throws the entire game.

“We reminded them yesterday that (Thomaston) haven’t had a competitive game really since January,” Warriors coach Brian Medeiros said. “We’ve been tested all year, so if we can keep it close, if we can make plays down the stretch, we’re going to have a chance to rattle them. And I think that’s what happened.”