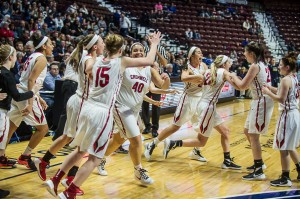 UNCASVILLE, Conn – With no starter standing taller than 5-foot-8, Cromwell showed that size never mattered this season during the Panthers’ undefeated run to the Class M girls’ basketball state championship.

Cromwell’s calling card is a suffocating half-court defense that held 12 opponents to under 31 points this season. And the Panthers saved their best defensive effort for last Saturday in a 43-20 win over Notre Dame-Fairfield to win the Class M title at Mohegan Sun Arena.

It was the second state title in six tries for top-ranked Cromwell (28-0). The Panthers previously won hardware in 2013 when their current seniors were freshmen for another undefeated team that beat Notre Dame in the finals, 42-28.

“We’ve been able to overcome our lack of size all season by playing great defense,” Cromwell coach Kelly Maher said. “We’ve gotten better as the season has gone along. To hold a team to 20 points, I couldn’t be prouder.”

Emma Belcourt led a balanced Cromwell scoring effort with 11 points, which is not a lot but plenty when the opponent scores 20.

“We watched film on Notre Dame and had a great scouting report,” Cromwell forward Araya Lessard said. “We had to stop their two girls down low and run out on their 3-point shooter. I felt we knew every move their were going to make.”

The 11th-seeded Lancers (21-7) made just one of seven 3-point shots – connecting for their first basket of the game from downtown- and did not score a single fast-break point. Notre Dame (0-6 in finals) made just eight of 28 from the field (28 percent shooting.) The Lancers’ score-by-quarter box read 5, 6, 5 and 4.

“Cromwell settled down in their halfcourt defense and guarded the heck out of us,” Notre Dame coach Eric Demarco said. “They made us feel very uncomfortable. Usually we do that to teams, but Cromwell’s accentuated what they do best and took away what we do best.”

Cromwell, which lost in the M finals to St. Joseph-Trumbull last season, used a patient offense to keep the ball for long stretches, including the last three minutes of he game. 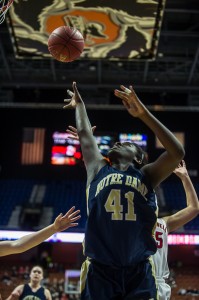 The game turned when Notre Dame starters Taylor Ceballos, a 6-foot center, and point guard Dayniera Artis each collected two fouls early and were limited to four minutes apiece in the first half. Cromwell turned a 7-5 first-quarter lead to 21-11 at halftime.

“With two starters on the bench for most of the first half, I felt okay being down 10,” Demarco said. “But they kept us from getting anything going.

Notre Dame proved to be undefeated-season slayers while knocking off New Fairfield in the Southwest Conference finals and Enfield in the Class M semifinals. But the third time was not the charm with Cromwell.

“When coach called timeout with about a minute left, we came out of the game together,” Villard said. “It was nice because as freshmen, we were the ones coming into the game to relieve the starters. It came full cycle.”