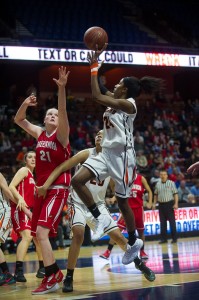 UNCASVILLE, Conn –  Alexa Kellner finished with a game-high 19 points for the fourth-seeded Stamford girls basketball team, which defeated No. 10 Greenwich 50-45 for the Class LL state championship Sunday afternoon at the Mohegan Sun Arena.

Kellner scored nine of her points in the fourth quarter for the fifth-ranked Black Knights (25-2), who went on a 8-0 run in the final quarter to put the game away.

“She (Kellner) has been doing a really good job for us and did a really good job on (Abigail) Wolf,” Stamford coach Diane Burns said. “And she hit some big shots for us. That’s been the story of this team all season, different people stepping up.”

It was the first state championship for Stamford and the first appearance in a girls basketball state final for either of the FCIAC schools.

Stamford was able to survive a subpar performance from St. John’s University-bound guard Tiana England, who scored just 10 points on 4-of-20 shooting from the floor.

“Tiana is an unbelievable player and unbelievable leader and she’s able to keep her composure when things aren’t always going great for her. She’s the leader of this team and that’s why we able to do what we did this season,” Burns said. 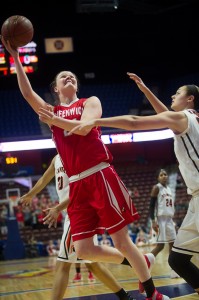 The game was tied five times in third quarter. Wolf, who will play at Northeastern next season, finished her career with 14 points and nine rebounds for Greenwich, which won the regular-season matchup between the two schools 64-55 on Feb. 3.

“What they have accomplished in a short amount of time is nothing to be ashamed of,” Greenwich coach Chrys Hernandez said. They are one of 100-some-odd teams and they were able to play on the last day of the season. It would have been nice to win it, but I’m really proud of them.”

“We have a lot of talent, have a lot of athleticism and we have people completely committed to the team concept,” Burns said. “These girls really bought in this season and it really paid off.”