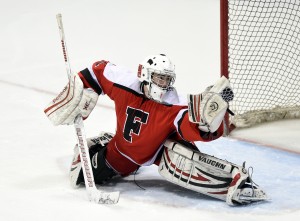 NEW HAVEN, Conn. – Heading into the Division II hockey final, Fairfield Warde/Ludlowe’s top line of Jack McCormick, Jake Fuss and Owen Emmendorfer knew it would be a focal point of the contest. The senior-laden line responded in a big way.

Combining for seven points in the game, including the game-winner by Fuss just 1 minute, 22 seconds into overtime, the trio led the second-seeded Mustangs to a 4-3 victory over top-seeded North Branford Friday evening at a packed Ingalls Rink.

“We have a lot of talent on this team,” Fairfield Warde/Ludlowe coach Tom Roche said after his team concluded the season 19-4-1. “We win as a team. The individuals all help us win as a team.”

After North Branford evened the game with a pair of third period goals, the Mustangs turned to their leaders to take home their second state title since 2013, also an overtime winner against East Catholic by the same score.

Emmendorfer tipped a shot in front which was turned aside by North Branford goaltender John Lovelace. The rebound remained in front where Fuss was waiting to put in the winner.

“We came into the locker room after they scored two quick ones on us,” Fuss said. “We knew the first show was going to be the key in overtime. We wanted to test him (Lovelace) early. We wanted to go to the net and get some good opportunities. I hit it twice and once it hit my stick, I knew it was going in.”

McCormick finished with a pair of first period goals, Fuss added two assists to his game-winner and Emmendorfer had two assists.

“With a player like Jake Fuss on my line, it makes things a lot easier,” McCormick said. “Every time we go on the ice, we are always a threat. We always have a chance to score.” 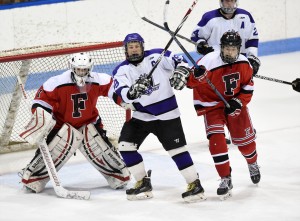 The Mustangs were opportunistic throughout the contest as they finished with just 17 shots and were outshot nearly three-to-one in the game. Senior goaltender Mike Grace was the key for Fairfield Warde/Ludlowe as he made 43 saves, including 14 in the third period when the Thunderbirds put up a relentless attack.

“He has been great all year,” Roche said of Grace. “He made some big saves for us tonight.”

Overtime was needed as the Thunderbirds continued an all out attack in the third period, pumping 16 shots on goal, and tying the championship game with two goals in the final 6:06 of regulation.

After being denied in the first eight minutes of the third by Grace, the Thunderbirds forced the overtime with two goals in a span of 2:40.

Mike Pantera gave North Branford some momentum when he blasted a shot by Grace to cut the deficit to 3-2, before a brilliant pass by Brian McKee set up the equalizer. McKee slid a pass over to Adam Burkle, who neatly slid the puck between the pads of Grace with 3:26 remaining in regulation to even the game at three.

“I am proud of the way we played,” North Branford coach Ralph Shaw said after his team finished the season 18-5-1. “Obviously, we got down early in the game, but we fought back and kept rising to the occasion. We tied it late in the third. The guys left everything on the ice. I am proud of them.”

The Mustangs were outshot decidedly in the contest, 46-17, by a North Branford team which had plenty of jump in its step. Unfortunately for North Branford, Grace was on his game as he stopped 29 shots in the first two periods alone.

If there were any questions with how intense the much-awaited contest would be, they were answered in the first 15 minutes of play. The opening period saw 26 shots and four goals scored in what was a wide open affair.

While the Thunderbirds needed less than four minutes to start the scoring, it was Fairfield Warde/Ludlowe which held a 3-1 lead thanks to the play of McCormick, who scored twice in the first 15 minutes of play.

Trailing 1-0 after North Branford’s Dominic Raccio took a pass from Nicholas Giatrelis on the right wing and wrapped around the goal to one-hand a shot past Grace 3:22 into the contest, the Mustangs made the most of their first period scoring opportunities.

The Mustangs needed just 1:27 to get the equalizer when McCormick scored inside the right post off a scramble in front. The game remained even at one until the final four minutes when the Mustangs took over.

With the Thunderbirds trying to move the puck up the ice, a turnover was picked up in front by Fairfield Warde/Ludlowe and immediately turned into a goal when William Von Brauchitsch deked and backhanded a shot past Lovelace with 3:38 to go.

“We don’t give up,” Roche said. “This is a hard working team. North Branford is a well-coached team. We knew they would battle. We were able to get some big goals in the first period.”

If the goal by Von Brauchitsch was not tough enough for the Thunderbirds, a goal in the final 10 seconds of the opening period by McCormick certainly did not help. Off an odd-man rush and a beautiful pass from Fuss, McCormick put the Mustangs on top 3-1 with 6.6 seconds left in the period.