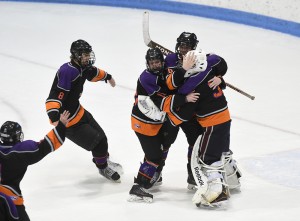 NEW HAVEN, Conn. – After upsetting top-seeded New Fairfield-Immaculate in the semifinals four days earlier, Westhill-Stamford was not about to settle for second best.

“We gave up three goals and they tied it up in the third,” Rich said after his team finished the year 15-6-2. “We needed to score. I got a good pass, went on a breakaway and finished. There was under a minute left. I knew it needed to go in.”

With the game even at four after a furious SWS comeback, John Nilsen found Rich open at center ice. Rich raced in on SWS goaltender Zachary Bloom and fired a shot past Bloom in the final 30 seconds to give Westhill-Stamford the last lead of the game and the title.

Rich and his linemates, Chris Clemmenson and Cooper Healy combined for eight points and all five Westhill-Stamford goals in the contest as Clemmenson also scored twice and added an assist and Healy had two assists.

“Nick (Rich) was huge,” Westhill-Stamford coach John Santagata said of the line. “(Chris) Clemmenson had a huge game. A couple of guys we needed to pick it up today really did.”

With his game-winner, Rich made sure the Vikings did not squander what was a three-goal lead with 10:40 remaining in the contest after Rich scored his second of the game.

Before the Vikings could celebrate their first state title, they had to withstand a valiant comeback attempt by the Wreckers in the third period which saw SWS score twice in 2:33 to cut a three-goal deficit to one with 7:10 remaining in regulation.

After Rich’s unassisted goal with 10:40 left in the third gave the Wreckers what seemed to be a safe 4-1 advantage, SWS stormed back 57 seconds later with a goal by Jesse Greenspun off an assist from Ryan Johnson.

Johnson then fed Samuel New in front and New slid the puck past Stamford-Westhill goaltender Christian Compolattaro to get the Wreckers within 4-3.

“They came back and made a game of it,” Santagata said. “It was not easy. We were determined after last year’s semifinal loss.”

SWS continued the pressure and used a three-on-one break to even the game at four with 3:03 left in regulation. Greenspun took the initial shot which Compolattaro stopped, but the rebound went to New who evened the contest at four. 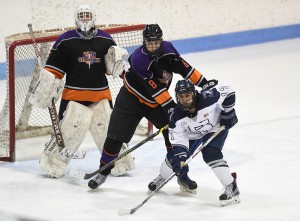 “That is what these kids are about,” SWS coach Todd Sharinn said after his team closed the season at 15-9-0. “This is a team that works hard. We had a vision and focused on committing to it. All of them made sacrifices. I am very proud.”

While the opening period belonged to SWS, the second was clearly all about the Vikings as Westhill-Stamford took control of the game. Clemmenson was at the center of all three goals, scoring twice in less than a minute to put the Vikings ahead to stay.

After SWS just missed taking a two-goal lead when R.J. Gupta hit the post less than two minutes in, Clemmenson took over. With the Vikings killing a penalty, Clemmenson stole the puck, broke in on Bloom, deked and went to the backhand to even the contest with 3:11 gone by in the period.

Just 44 seconds later, Clemmenson was at it again. Taking a perfect pass from Healy, Clemmenson fired a shot between the legs of Bloom for a 2-1 Westhill-Stamford advantage.

“We know each other so well,” Clemmenson said of his line. “It is a great feeling and it is great for our city.”

Compolattaro, who finished with 26 saves, kept the Vikings on top by denying Evan Mancini from the point five minutes in, and turning aside a shot from the left circle by Johnson 55 seconds later.

The Vikings took advantage and extended the margin to 3-1 with 8:22 left in the middle period as Rich was positioned in the right spot, poking a loose puck past Bloom. Healy and Clemmenson picked up assists on the goal which gave the Vikings control of the contest.

SWS wasted no time setting the tone of the opening period as the Wreckers held a 10-3 shot advantage and more importantly a 1-0 lead after scoring on their first shot of the game.

Just 35 seconds into the contest, Greenspun came off the left wing, circled around and fed a perfect pass to Johnson in front. Johnson wasted no time firing a shot past Compolattaro for a 1-0 lead.

While Johnson’s tally was the only goal of the first period, SWS applied plenty of pressure throughout. Compolattaro had to be at his best as he denied a backhander in front by Johnson with a blocker save 2:30 in, and made a fantastic pad save off a one-timer in front by Ryan Purgay 31 seconds later.

Bloom, who finished with 14 saves, faced only three shots in the opening 15 minutes, but saved his best save for the final minute when the sophomore denied a wraparound attempt by by Everett Dolan with a pad save to preserve the SWS lead heading to the first intermission.