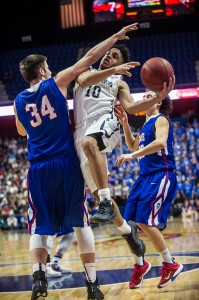 UNCASVILLE, Conn — Darius Rucker is a regular act at the Mohegan Sun Area, but the performance of Immaculate-Danbury’s Darrius Smith and Darius Hunter in the Class S boys’ basketball championship here Saturday may have one-upped the former Hootie and the Blowfish frontman’s best show.

Smith, a quick 5-8 guard, and Hunter, a 6-foot swingman, gave Coginchaug fits with their athleticism. The 25-3 Mustangs, who lost only to Class LL semifinalist Danbury and Class L quarterfinalist Pomperaug, led for good after closing the first quarter with a 7-0 run.

Smith’s steal and lefty finish on a layup gave Immaculate a 15-9 lead early in the second quarter. Smith scored eight points in those eight minutes to to give the Mustangs a 27-18 halftime lead. 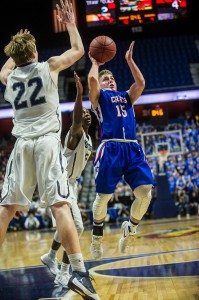 Coginchaug took advantage of Hunter’s foul trouble and battled back with a strong third quarter when Jacob Sapia scored three straight hoops to cut the gap to 33-31 with 1:41 left before the Mustangs took a 35-31 lead into the fourth.

“I thought we settled down and contained Smith after his hot first half,” Coginchaug coach Todd Salva said. “I thought this was going to be as close as our three-point wins in the quarterfinals and semis. This team came back all year.”

Cameron Powers’ 3-pointer early in the fourth cut the Immaculate lead to 35-34, but Hunter answered with a three to up the lead back to four.

Immaculate proceeded to pull away, effectively utilizing a spread offense and capitalizing on offensive putbacks on two missed free throws.

Smith hit a layup, then hit William Hatcher on an inbounds pass for a banker to give the Mustangs a 43-36 lead with 2:38 left. Hatcher, a 6-4 forward, converted a putback off a Smith missed free throw to up the lead to 46-36.

“Once we get a lead, we like the spread because we have the quickness to spread the floor and go by people,” Immaculate coach Nelson Mingachos said. “We face a lot of quick teams in the South-West Conference, so that tough schedule prepared us well for the Class S tournament.”

Immaculate shot 50 percent from the field (19 of 38). Powers (12 points) and Sapia (11 points) led Coginchaug, which made seven 3-point shots. After losing in the Shoreline Conference tournament quarterfinals, Salva is proud of the way Coginchaug responded in Class S.

“To say I am proud is just scratching the surface of how I feel about this team,” he said. “We ran into an experienced, discipline team tonight.”