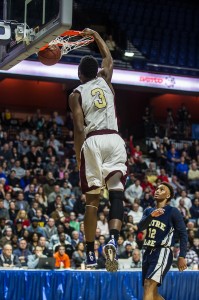 It’s the third straight state championship for the Hearts (26-2), who beat Valley Regional in Class S the last two seasons.

“As soon as I came to Sacred Heart (during his sophomore year), I said I wanted it. I told the coaching staff, told everyone I wanted three (straight),” Heron said. “It’s been a journey but we did it.”

The Hearts haven’t lost to a team in Connecticut since to Crosby in the 2014 Naugatuck Valley League tournament final.

Heron led five players in double figures for the Hearts. Tyrn Flowers, who has committed to play at UMass, added 19 points and eight rebounds while Charles Fisher had 12 points and 10 rebounds.

“I looked at the championship from two years ago and the one from last year and physically, he (Heron) is a completely different kid,” Sacred Heart coach Jon Carroll said. “That doesn’t just happen. It’s a testament to his hard work ethic.” 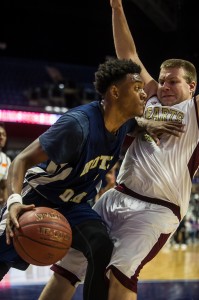 Sacred Heart held a 53-26 rebounding advantage over the Lancers (24-4), the South-West Conference tournament champion. The Hearts led 9-0 to start, 32-10 after the first quarter and 58-26 at halftime.

Noreaga Davis and Anthony Mongillo finished with 14 and 12 points, respectively for the Lancers, who reached the Class M state final for the second straight season.

“There were 47 teams in Class M and we’re second, that’s not the end of the world,” Notre Dame coach Vin Laczkoski said. “We’re 24-4 and got beat by the best team in the state.”