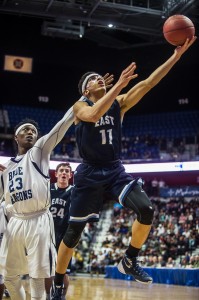 It was the fifth state title for the Eagles (26-3) and second in three seasons.

Fourth-seeded East Catholic made seven of its eight shots. That’s as many shots the Blue Dragons made through three quarters.

“We came out shooting right out of the gate,” Eagles senior Mark Carbone said. “It gets into the other team’s head, I feel like (they think), ‘Oh, wow, these guys can really shoot it.’ They start playing tighter, which gives us more lanes to drive by them and get layups.

“It’s a good night to shoot the crap out of the ball.”

Third-seeded Middletown struggled to get any shot to fall. It had missed 22 of its 28 shots with over three minutes remaining in the third quarter.

The Blue Dragons’ offensive woes were compounded by 23 turnovers.

“We’ve had one game where we weren’t shooting the ball very well, but we were able to pull it out,” Middletown coach Ricky Privott said. “It doesn’t happen a lot. It’s just unfortunate that it happened tonight.

“The surroundings got to them a little bit. I don’t know if we ever settled down.” 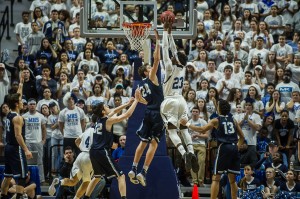 McGuirl made a layup off the opening tip. He followed with a steal and assisted on Reilly’s 3-pointer to give the Eagles a 5-0 edge 26 seconds into the game.

McGuirl had a steal and a dunk, followed by back-to-back 3-pointers by Reilly and McGuirl, to extend East Catholic’s lead to 17-5 with 2:34 left in the first quarter.

Middletown, meanwhile, couldn’t get anything to drop as it missed 10 of its first 13.

“They executed a great defensive game plan,” East Catholic coach Luke Reilly said. “They were really tight with it. We held them to 51 points, a team that likes to get up-and-down, a team that can get to the rim and shoot.”

McGuirl had another layup and made the first of two free throws seconds later to extend his team’s lead to 24-10 with over three minutes left in the first half.

Carbone’s layup with seven seconds left in the third quarter gave the Eagles their largest lead, 47-28.