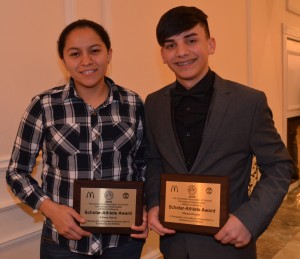 When Liliana Garcia walked across the stage at the 33rd annual CAS-CIAC Scholar Athlete Banquet with her classmate Michael Ocasio it was a few more small steps in a lengthy journey. Considering the trials, tribulations and detours of that journey, it is remarkable Garcia was on that stage having her photo taken being recognized as one of two Scholar Athletes from Bulkeley High School. Perhaps most importantly, those few steps onto the stage are far from the end of her journey. In fact, it’s really still in its infancy.

All of the excellent speakers at the Scholar Athlete ceremony used many of same words to describe the efforts of the exceptional 348 students in attendance. Words like “dedication,” “balance,” commitment,” “sacrifice,” and other similar sentiments were heard to describe the hard work and ability to juggle sports, school, and other endeavors. Garcia could offer a dissertation on those ideas (in two languages if necessary) as her path and journey to success at Bulkeley demonstrate she has enough resolve to get through just about anything.

The challenges in Garcia’s journey really began when she was 12-years old in El Salvador when her father decided to come to the United States to try and provide more for the family, only to see his efforts prove unsuccessful. Roughly two years later, Garcia’s mother also made the attempt, leaving Liliana without either parent, a trial that proved particularly difficult.

“I felt very alone without my mother,” Garcia explains. “I missed her dearly. I even dropped out of school for two years because my mom was not there to encourage me, which I now regret.”

That loneliness sparked Garcia to attempt her own trip to the United States, negotiated by her mother. The incredible journey through numerous countries with many modes of transportation and treacherous conditions ended with her being picked up in a raid of a house by Immigration and Customs Enforcement which landed her  in a shelter in Los Angeles. There she was eventually granted refugee status and after six weeks she was claimed by her mother and was brought to Connecticut where she now stays with a legal guardian and lives here legally.

That was the finish of one incredible journey, but was just the start of another as Garcia now had to navigate the unfamiliar waters of an American high school even after being out of school for a long time and not speaking English. Not surprisingly given the challenges she had faced to reach this point, she was not going to be thwarted upon making it this far.

All Garcia has done since coming to Bulkeley is excel in every area including the athletics field and the classroom. She will graduate this spring ranking 10th in her class and is a member of the National Honor Society and Key Club. She’s a Career Beginnings member and her academic accomplishments earned her acceptance to UConn for next fall. Meanwhile on the soccer field she earned three varsity letters and was named the team MVP two of those seasons. And, of course, all of these accolades led to her selection as Bulkeley’s female CIAC Scholar Athlete recipient.

As if taking all that on wasn’t enough of a challenge, Garcia also spends as many hours as she can working to help support her family to pay rent, utilities and whatever other expenses come up.

With all she has achieved, it’s no wonder those who have come in contact with her are so impressed by not only what she does, but how she does it.

Bulkeley Director of Athletics Diane Callis puts it succinctly. “Liliana is an incredible sweet, friendly, respectful, hardworking, and conscientious young lady that we are so very proud of.”

The journey may have been hard and long to bring Liliana Garcia to Connecticut and onto that Scholar Athlete stage. But fitting of who she is, those hardships and challenges have not made her bitter. Instead, where others might see obstacles, she sees opportunities and inspiration. 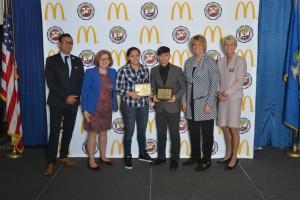 Liliana Garcia’s journey to the Scholar Athlete stage was a long one. Photo G&B Photography.

“Now that I’m in the Unites States, I want to choose a career where I would be able to help other people and change their lives as my mom did for me,” Garcia says. “While I do not know exactly what I want to do for a career, I do know I want to be involved in the community in many ways. Without my experience of traveling to the United States from El Salvador, I would not have realized how much I am willing to help others and I know I can achieve this by furthering my education and it will bring me one step closer to improving the lives of others.”

That is a CIAC Scholar Athlete, someone who has already achieved and overcome so much, but who still sees more she wants to achieve. Dianna Wentzell, the Connecticut Commissioner of Education noted at the banquet that the students being honored “epitomize the best of who we are in Connecticut.”

That is certainly true in the case of Liliana Garcia. She has already come so far; who knows where her journey will lead from here.