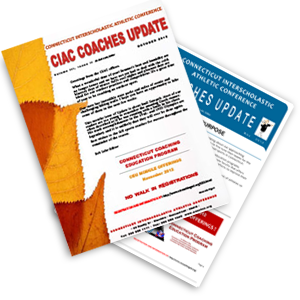 The CIAC Coaches Newsletter is published monthly during the school year and sent via e-mail to nearly 5,000 high school coaches and athletic directors throughout the state. The newsletter contains stories specifically designed to help coaches achieve more success on the field and off, highlighting important areas such as training methods, dealing with parents and athletes, profiles on successful coaches and dealing with the psychological aspects of coaching.

If you are a coach in Connecticut and are not receiving the newsletter by e-mail, be sure that your athletic director has entered your e-mail address in the CIAC Online Eligibility Center. The newsletter can also be read via this page, as issues are posted here as soon as they are emailed.